Late Thursday afternoon I arrived home from a three day conference at the Police College and straight away I am into unpacking one bag and packing up two bags for my trip to Auckland for the 1996 AGM and DXpedition at Little Huia. One bag containing clothes etc for I to have an extra two days in Auckland and the bag contains the Icom R-70 and all the associate bits and pieces one needs for a DXpedition, WRTVH etc. 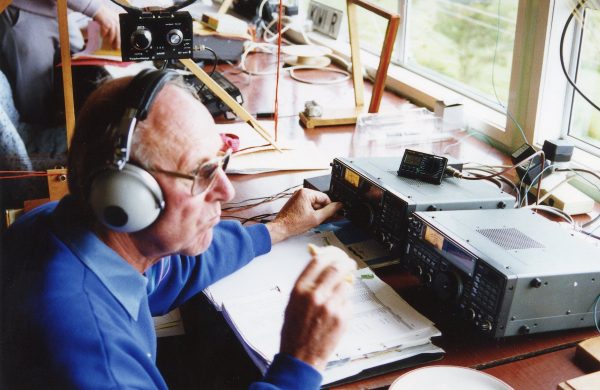 7.30pm arriving at the station with time to spare to catch the overnight train to Auckland which departs at 7.45pm, the bag in which my clothes etc are packed goes into luggage van but the one with the receiver will have to travel with me in the carriage. Check in with the Train Manager and then into the second carriage from the rear, the service tonight is four carriages and two luggage vans as we are to uplift a school party from Paraparaumu.

We depart Wellington on time and I settle down with a book and my scanner scanning through the railway frequencies. Ater departing Fielding the lights are switched off and I settle down in my sleeping bag. I next open my eyes and ﬁnd we are at Te Awamutu and the time is about 4.15 am. What a great sleep, over four hours.

We arrive in Auckland about 10 minutes late and alter gathering together all my gear it is off to ﬁnd some breakfast. After two cups of tea it is out with the cellphone and make contact with Graeme Dixon who says trafﬁc permitting would pick me up from the station at 8.30am so while waiting for Graeme it is time to take in the sights around the station area.

I meet Graeme near the platform where the day train to Wellington is about to depart and we sit discuss the railway situation before heading off ﬁrst to New Lynn Shopping Centre. While travelling along the Great North Road approaching Avondale we spot an off while coloured car with a Kiwi Radio sign showing in the hack window, Graeme mentions that Graeme Barclay and his partner are coming up for the AGM, we pass the car and wave out and try and indicate that we will stop up the road but they disappear on us.

Arriving at New Lynn we stop to buy the odd things that we have both forgotten to bring with us, i.e. pillow, toothpaste. Then it is off to Little Huia, at this point I must say the weather is sunny and quite warm. (Surprise).

Upon arrival at Little Huia we find that we are not the ﬁrst, the car we spotted earlier is there. Graeme Barclay and his partner Sue introduce themselves and after having a chat out in the sun it is then into setting up the main listening area, we discover that we are least two tables less than previous times. Soon after midday others start arriving and the ﬁelds in front of the main building started to took like a antenna farm with antenna wire going in all directions and people turning into mountain goats.Someone was heard to remark that the scene was reminiscent of the BBC Monitoring Service.

Once most of us were set up it was on with the headphones, but oh, conditions were not very good, it was quite noisy and things did not start to improve until tea time or after. Saturday saw members up and about by 5.00am, conditions were a little better than the previous evening. Atter breakfast more members started arriving for the Annual General Meeting which commenced at 10.30am with about 30 members present from Wellington, Napier, Hamilton and Auckland.

The meeting commenced with the Presidents report in which he made comment re the future of DXing with regards to major broadcasters cutting back on transmission hours, low sunspot count and DX Clubs struggling worldwide. The League with its aging membership and some of the above factors continues to experience a slight fall in membership. The President also commented that it was encouraging to see members in Christchurch making some progress towards forming a branch.

Barry also thanks Peter Grenfell and his team in Oamaru for looking after the League’s Archives over the past years and for overseeing the movement of the Archives to the Hocken Library.

During the meeting two prizes were drawn, junior member Dean Jackson won the door prize of a Ranger receiver and Ross Renton of Balclutha won a Sangean 803A receiver for the early Subscription renewal.

After lunch an auction was held in which I was able to keep my hands in my pockets for most of the time, thou I did buy a couple of items. Proﬁt for this auction is likely to exceed $400.00 when all the money is in. After the auction it was again back to DXing.

Sunday morning saw most of the team up at about 5.00am and then half returned to bed as conditions were noisy and New Zealand stations were breaking through on the lower bends.

Durirng the day the President gave a talk on his recent trip to Canada and the USA. After Barry had ﬁnished Graeme Barclay gave a talk on Kiwi Radio which I missed most of due lo a splitting headache.

Conditions on Sunday evening for both Shortwave and Mediumwave were quite good with Radio Union on 660KHz peaking above KTNN. Monday saw Bryan Clark and myself on the road by 5.30am to the airport to meet Peter and Jill Grenfell arriving back from Britain, their Air New Zealand ﬂight was 30 minutes early so they were waiting for us.

We took them both back to Little Huia for the St Helena broadcast and to show Peter that reception in the North Island was just as good as in the South island, but reception of St Helena for nearly all of us was not to be. John West who carted his receiver and car battery and strung up plenty of wire at the top of the hill on to the let of the camp was able to log the transmission from St Helena.

During the weekend Kiwi Radio operated a 100 milliwatt transmitter on FM 102.2 and ran a competition on interval signals, members who logged the transmissions received a QSL. A competition ran over the weekend for the loggings made during that period and the winner who received a copy of the 1997 Passport to World Band Radio, donated by Burnett Pollard Books was Phil
Van de Paverd.

After breakfast on Monday morning it was time to ﬁnish chatting to people and then to hit the paddocks to roll in the antennas. Graeme and I departed just before lunch and he dropped me in town where railway friends picked me up and looked after me for the next two days. I departed Auckland on Wednesday night, once again sleeping for most of the journey arriving back in Wellington ahead of time on Thursday morning.

Once again I enjoyed my time in Auckland at Little Huia and I must ﬁnish by thanking the Auckland Branch for the effort they put into organising the weekend, also a big thanks must go to the cook, John Watson and able young helper Jim Pope, thanks to you both for wonderful meals over the weekend.