What Is This Thing Called DX? (to a well known tune)

While still at Primary School, a coil with a ‘thingy’ in the middle and a few lugs on the outside found its way into our household. With the aid of headphones I spent an hour or so each night for some months listening to a radio station on the medium wave band via a lead-in that dad & I hooked up to the main house antenna. In those days almost every house had a very high antenna to get reasonable reception above the electrical noise of the old Invercargill Tramway dc system. Ours was no exception with former American redwood yacht spars joined halfway, probably reaching close to 12m and guyed at three positions. Wire length would have been approx 24 meters and our house was 500 to 600m from the tram lines! Others living closer had much higher antennas. After what seemed a relatively short period of time my listening was cut short by a set malfunction. A close relative who as it turned out owned a ZC1 arrived one day with a soldering iron, a diode of some sort and a few bits of wire (“just in case”). The result being that I could no longer hear my medium wave station but lo and behold there was a Radio Australia shortwave station, nothing else. That was the end of that as far as I was concerned and the set was consigned to a box out of sight. My secondary schooling at Southland Technical College started a couple of years later and I sometimes bought a milkshake at the little milk bar/grocery shop just along in the next block of Tay Street. There was a sign on one wall inside the shop pronouncing, “New Zealand Radio DX League”. The couple who operated the shop seemed to be very obliging and it didn’t take me long to sum up the courage and ask, “What does the Radio DX League do?” OK, you guessed right, the shop was operated by Mervyn and Netta Branks and after explanations were completed I was sold on the hobby, BUT, there was a problem, time. I had just started a three piece dance band, was also learning a second instrument at school and of course there was homework to consider. The years following saw me enter an apprenticeship, so no dxing was done for quite some time.

WNEU Wheeling West Virginia 1600 KHz 5000w @ 10.00pm NZST (1000UTC) This was a sign on with a rooster crowing. The morning announcer phoned me after receiving my report, had me on air and “played the rooster” again a couple of times but unfortunately there was no reception at that time.

Note about the Hammarlund;

This receiver was labelled “HQ 120” but the Amateur Radio operator that lived next to Pat McRodden, and worked at Colyer & Beale, informed us that because the receiver was a “rack & panel” model, it was designated “X”. Hence my reference to Hammarlund HQ 120X. Now, looking back through vintage paraphernalia I’m not sure that holds true as various HQ’s that were obviously shelf or table models have been labelled “X”.

And then there was “Tiwai”;

Sometime in the early 1970’s Southland Branch member Wyn Machon a New Zealand Aluminium Smelter employee, mentioned to Ray Crawford, another NZAS employee, he had found a shearing shed and a house on a farm bought and used by NZAS to monitor any fallout from the smelter. The facilities which were not inhabited were located about six plus klicks from the main road and were devoid of any electricity service. Ray & Wyn negotiated permission to “try out” the area and Ray & I set up an antenna from the shed to the house. We used my Phillips table model dry cell battery radio. Upon connecting the antenna and turning the radio on, we were met with dead silence. “oh no the battery must be flat!” But when the tuning cap was moved there were stations everywhere, and between each station there was no noise whatsoever. What a great place to dx. The rest of the Tiwai story is not really mine to describe as others from within the branch will have different tales to tell of their experiences both in helping to put the listening post together and the many sojourns to dx on the Tiwai Peninsula.

Southland Branch members who really taught me just what DX was all about and the camaraderie that goes with it.

I never did own a camera in those early years and any photo’s I have, but taken by others, seem to be already included in related articles.

In the late 1970s after shifting house for family expansion, I quickly found because of city electrical noise in the new area there was not the same opportunity to dx the Broadcast Band. In fact most night’s Australian signals were not heard till around 9.30-10.00pm! Where were the stateside signals? What to do next? I studied to become an Amateur Radio Operator and became licensed in 1980 and soon found the dx opportunities in this form of the hobby.

From the mid to late 1950’s, Inter-branch competitions were instigated. Using a scoring system branches were allotted points based on members verifications received on both the Broadcast and Shortwave bands. There were cups/trophies donated by generous sponsors. The Broadcast Cup was known as the Albert Stanton Cup, whereas the Shortwave Cup was called the Hope MacGregor Cup. There was also an aggregate cup and it was known as the Columbus Trophy. All these trophies were won at times by our Southland Branch. In fact a couple of photos have been unearthed while I was writing this epistle. Here I am proudly accepting the Columbus Trophy on behalf of the Southland Branch from Don Cambridge, the then manager of the Columbus Radio Centre in Invercargill. 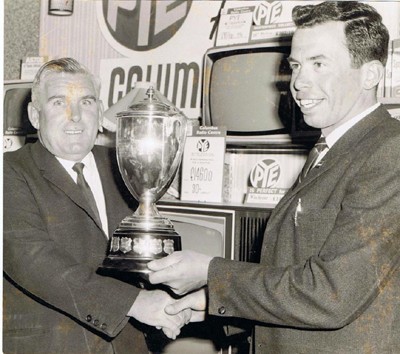 Below we see both the Albert Stanton Cup and the Hope MacGregor Cup. 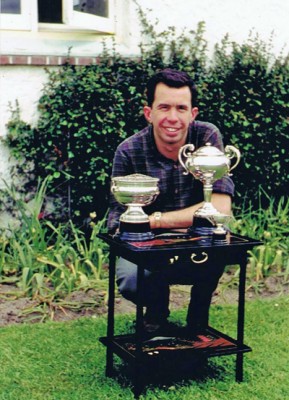 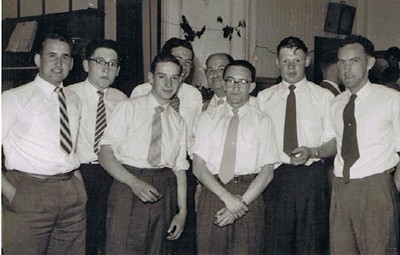 In the photo above which is from 1958 we find a ‘DXer’s Rogues Gallery’. From left to right: Derek Howie, Brian Bellett, Neville Ross, Sutton Burtenshaw and Mervyn Branks both partly obscured, Des Frampton, Trevor Service and Frank Tod.

What is this thing called ‘DX’? It’s the ‘Love’ of listening to radio stations in far off lands.