This article discusses a little-promoted side of the radio-listening hobby, that is “SWL” or shortwave listeners, who may not hold a transmitting licence but enjoy listening to and reporting amateur radio transmissions. In some countries, before you can venture on the bands, you must provide a certain number of ham QSLs before you can gain an operating licence.

So, how do you go about it? Traditionally, SWLs send a QSL card to the amateur radio station they hear, detailing the transmission, e.g. date, time (in UTC), mode (SSB, CW, RTTY, PSK31 etc) signal strength (RST-style) and most importantly, the call-sign of the station being worked.

So you’ll need some QSL cards, the cheapest way to obtain these is from a photocopy shop, or like me, buy them from a specialist in printing amateur radio cards http://www.ux5uoqsl.com/ You’ll also need a call-sign. These are issued by the NZART…. freely… you don’t have to be a member.

Next, you need to get the card to the station you’ve heard. You can do so by looking up their address in an international callbook or by looking at www.qrz.com . Now, there is another option, you can send the cards via the NZART QSL bureau for a small fee per card (much cheaper than mailing them). The disadvantage is the often lengthy time delay in getting the cards back. If you intend to send a large number of cards, it would be worth considering joining the NZART as bureau use is free for members. If you would like to swap QSLs but don’t want to get involved in all the expense, you can join www.eqsl.net and send and receive cards for free. The disadvantage in this scheme is that many hams do not belong so return percentages would be very low.

Readability is measured on a scale of 1 to 5.

The S stands for “Strength”. Strength is an assessment of how powerful the received signal is at the receiving location. Although an accurate signal strength meter can determine a quantitative value for signal strength, in practice this portion of the RST code is a qualitative assessment, often made based on the S meter of the radio receuver at the location of signal reception. “Strength” is measured on a scale of 1 to 9.

The T stands for “Tone”. It is almost redundant and almost always given as “9”.

For up to the minute happenings on who is hearing what, when, check DX Summit and for dxpedition news the ADXO website.

As the rules defining a country vary from organization to organization, let us look at the most common definition of an “entity” (or radio country) in the amateur radio world, that is the ARRL (American Radio Relay League) DXCC Rules.

There are 3 ways an entity can be defined:
1. Political Entities: Political Entities are those areas which are separated by reason of government or political division. They generally contain an indigenous population which is not predominantly composed of military or scientific personnel. An Entity will be added to the DXCC List as a Political Entity if it meets one or more of the following criteria: a) The entity is a UN Member State. b) The entity has been assigned a callsign prefix bloc by the ITU. (The exceptions o this rule are international to, such as the UN and ICAO. These Entities are classified under Special Areas, 3.a); and Ineligible Areas, 4.b).) A provisional prefix bloc assignment may be made by the Secretary General of ITU. Should such provisional assignments not be ratified later by the full ITU, the Entity will be removed from the DXCC List. c) The entity contains a permanent population, is administered by a local government, and is located at least 800 km from its parent. To satisfy the “permanent population” and “administered by a local government” criteria of this sub-section, an Entity must be listed on either (a) the U.S. Department of State’s list of “Dependencies and Areas of Special Sovereignty” as having a local “Administrative Center,” or (b) the United Nations list of “Non-Self-Governing Territories.”

3. Special Areas: The Special Areas listed here may not be divided into additional Entities under the DXCC Rules. None of these constitute a Parent Entity, and none creates a precedent for the addition of similar or additional Entities. a) The International Telecommunications Union in Geneva (4U1ITU) shall, because of its significance to world telecommunications, be considered as a Special Entity. No additional UN locations will be considered under this ruling. b) The Antarctic Treaty, signed on December 1, 1959 and entered into force on June 23, 1961, establishes the legal framework for the management of Antarctica. The treaty covers, as stated in Article 6, all land and ice shelves below 60 degrees South. This area is known as the Antarctic Treaty Zone. Article 4 establishes that parties to the treaty will not recognize, dispute, or establish territorial claims and that they will assert no new claims while the treaty is in force. Under Article 10, the treaty States will discourage activities by any country in Antarctica that are contrary to the terms of the treaty. In view of these Treaty provisions, no new entities below 60 degrees south will be added to the DXCC List as long as the Treaty remains in force. c) The Spratly Islands, due to the nature of conflicting claims, and without recognizing or refuting any claim, is recognized as a Special Entity. Operations from this area will be accepted with the necessary permissions issued by an occupying Entity. Operations without such permissions, such as with a self-assigned (e.g., 1S) callsign, will not be recognized for DXCC credit. d) Control of Western Sahara (S0) is currently an issue between Morocco and the indigenous population. The UN has stationed a peacekeeping force there. Until the sovereignty issue is settled, only operations licensed by the RASD shall count for DXCC purposes.

Now a challenge for you… grab your atlas or internet and find the following accepted radio entities: Scarborough Reef, Malpelo Island, Europa Island, Conway Reef, Market Reef, Ducie Island, Crozet Island, Pratas Island, Sovereign Military Order of Malta, Jan Mayen. These are all remote and largely uninhabited (some uninhabitable!) regions of the world considered “entities” by the ham fraternity… and here is a picture of one of them.. Scarborough Reef. 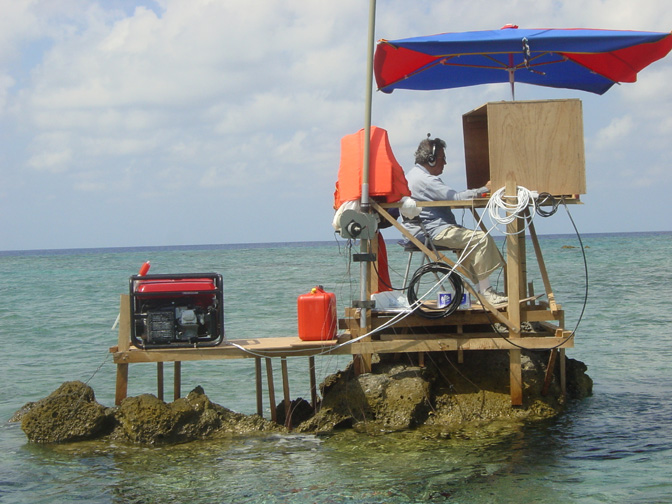