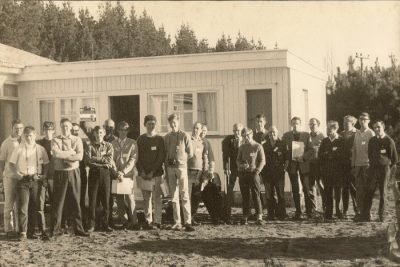 A Convention in June? A few years ago this would have been considered impractical and of very little value to the DXer. In those days the emphasis was on North American DX and what North American DX do we get in June? But times change. And we must change too. Today the BC dial is overloaded with New Zealand stations, and the channels that remain clear suffer from heterodynes and interference from the TV receivers that are in practically all homes. North American DX in the built-up areas is grinding slowly to a halt. And unfortunately we do not all live in the country or have week-end baches to which we can go to enjoy DX during the evening hours. To sum it up – between 6 pm and midnight DX is very sick. But what about the period from midnight to 6 am? This is a field of BCB DX that has been touched upon by very few members of the NZRDXL. And it is a most interesting time to listen, with stations of 30-40 different countries all transmitting during this period – not including the Europeans in the hour just around dawn. To try to encourage DX through the night the Canterbury Branch has held this Convention this month, when Asian DX will be the main interest.

Members attending the Convention will not be grouped according to their number of verifications, or their age. The young novice DXer will be teamed with the old hands, who, we trust, will pass on their knowledge and experience. In this way we feel the future of the League will be assured the younger members today are the leaders of tomorrow .. encouragement and advice by the DX stars of today will make DX leaders in the next decade.

We in Canterbury welcome you – we hope the weather stays fine .. and trust you will have an enjoyable stay with us here.

This will be the fourth Convention that we have held here in Canterbury. The first was away back in 1957. On that occasion visitors were taken for a bus tour of Christchurch, and around the Summit Road. All the meetings were held in town, and DX sessions were held during the night at Burwood and Spreydon. 1960 brought our 2nd turn, when we had the use of Anthony King’s bach at Leithfield. This was also the era of the Canterbury Car DXers, and odd listening posts were set up in stray corners of the Leithfield Beach Domain, with members huddled over their car radios. One prominent Southland member wore an American seaman’s cap almost all that weekend probably as an aid to better Yank DX. Most visitors found this method rather ineffective. The 3rd Convention here was in 1964. Members gathered at the Gardens where our amateur photographers were much in evidence. Then we had a visit to the Planetarium at the Museum, followed by dinner at the Airport. The feature of the DX session .. which was again at Leithfield – was the visit of camera-men from the local TV station. That meant on the Sunday evening all members had a very keen session in front of their TV screens! Programme with the top rating that night was undoubtedly the BATTLE OF LEITHFIELD BEACH!

Which brings us to 1968. How to arrange something different? The hours of DX activity are different from those previous gatherings – which were all held in February. There should be some DX in the afternoons, with possibly some South Americans coming through. Then there is a lull until late evening, when we start logging (we hope) Aussies and Asians. Some evening entertainment has been arranged (see the enclosed program me) and we hope to hear some of our top executive talking about the League today. During the night we hope all members will add to their logs, and get worthwhile verifications in the weeks that follow.

Christchurch DXers in the NZRDXL have been overshadowed to a certain extent by the Otago and Southland Branches in that only Anthony King (now of Wellington) had a crib available for out of town DX away from all the city noise. So the hobby here was enjoyed (?) under the handicap of all the electrical interference a large city can generate. Maurice Enright experimented with weird and wonderful receivers that tried to break the noise barrier, while Don Reed tried long antennae on top of his hen sheds in Burwood. Don then tried listening on his car radio at the various round town, using portable aerials that could be quickly erected and dismantled. The main drawback to this idea were the hordes of tourists who came along to see what was going on. Knowing talk of Army manoevres, Secret Service, etc., made DX far from easy. Don eventually found a quiet spot at Spencer Beach that seemed to have only two other permanent visitors – a young couple who regularly turned up there for their courting sessions. A friendly toot and a wave were exchanged each night they met and the same at the end of the evening – Don first to go if DX was poor .. the lovers leaving Don on his lonesome when the Yanks came booming in. Eventually Peter’s Lagoon ( on the south side of Spencer Park) was tried. (The Lagoon is now closed at night and not available for DXing.) Peter’s Lagoon was good. The ideal reception area was about 400 yards inland from the sand hills .. any closer seemed to have a buildup of static from the surf along the beach. DX was most rewarding. Among the fine verifications received from this location .. all on car radios were WDBQ 1490 XENA 1450 WTHR 1480 WEUC 1420 WJMO 1490 XESS 1450 (100 watts) and WWSC 1450.

Most antennae were 60 – 80 feet long, about 12 feet high, and some receivers had Q multipliers as added equipment. Aerials were erected according to the country members were listening for. NE in summer for North America, SE in winter for South America, and in a northerly direction during the late late shows when Asia or the odd Yank could be about. DXing on Peter’s Lagoon made one very tidy and methodical. To dismantle a portable antenna in pitch darkness, to pick up everything and pack it away in the car and drive slowly back along sandy ruts through the lupins or through swamp made a great finish to a great night’s hobby.

Sometime later, Arthur Harbrow, scouting round for another location was offered the use of our present branch bach in Lower Styx Road, about one mile north of Convention HQ. This has been used for branch meetings during the summer, and though power noise has occasionally been a problem at this location it has given members an opportunity to get out-of-town DX – very necessary now with so much TV interference in town. We trust visitors will have the opportunity of sampling Spencerville DX at its best.

IMPORTANT NOTICE The executive of the Canterbury Branch will not be held responsible for the loss of sleep by any members attending this Convention.

NEWS ODDITIES by B.C. Receiver, our Raving Reporter. We understand that Ken Mackey who fled to Auckland when he heard we were going to stage a Convention will now be coming down to see us after all. Ken has gone north to support the Post Office in Auckland .. Jack Fox, Dominion President, will speak to members while he is here. Jack wishes to promote his new type of DX, known as HDXVB (horizontal DX vertical bottle) … As Des Lynn is a member of the Transport Department please do not upset him by travelling at excessive speeds over narrow country roads while in Canterbury. Remember anything over 75 mph is too fast … anyone flying up to the Convention in their own plane please bring Douglas Johns your verification card with you. Douglas has 3000 verifications from aircraft – has he got yours? … Members have to wear collar and tie at the Official dinner on Saturday night. This is to make all members look reasonably normal while in the city area … All members are requested to assist in cleaning up the kitchen after meals – the sooner these chores are completed the sooner we can all continue with the festivities … We wish to thank the various firms who have made donations to members … BE POLITE: if the TV cameras come out do not rush to the front and hog the show – your wife or girlfriend might see the programme, and then you’d be in tie cart!’

CANTERBURY BRANCH Next meeting will be held at Des Lynn’s, 40 Clearbrook Street, on Tuesday 11th June.

A spot of Comedy (we hope!)

11. 00 ALL NIGHT DX ACTION STATIONS “Here we will sit and let the sounds of music creep in our ears” (Shakespeare)

1. 30 am. Late supper as required. “Oliver Twist has asked for more” (Dickens)

10.00 Free period. Visitors to the City will be guests of Canterbury members for dinner.

10.30 Return to DX Action Stations. “There sweet sleep is not for the weary brain (Thomson)

No receivers are to be used in the main bunkhouse. This will give any members who wish a chance to sleep during the early evening or the Sunday afternoon session … Late suppers are available at any time. Coffee and milk will be left in the kitchen … help yourself. Keep Zip in kitchen topped up – if you use a lot of hot water please refill and switch on (or you will find yourself in hot water!) … All hands to pile in and help with chores whenever possible, but working parties will be specially rostered for meals.