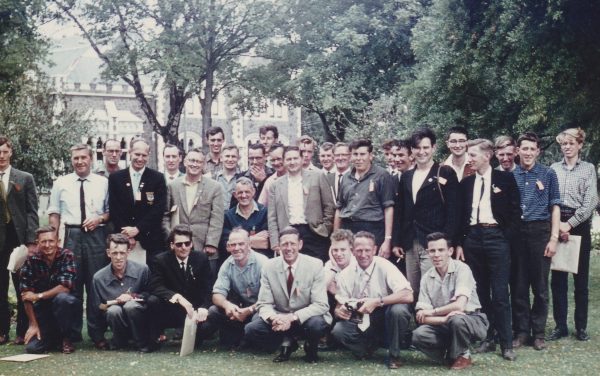 After a week of fine, warm weather, Saturday, February 15th was overcast
and mild. At 1.50 on Saturday afternoon, conventionites gathered at the Botanic Gardens where Ian Peterson was kept busy collecting the 10/- registration fee. Old friends were greeted, new ones made, and all too soon it was
time to go into the Museum, along side the Gardens for the talk and demonstration of the Planetarium, given to us by Mr. A. Eyles, not forgetting the
able assistance of Don Reed. This was a fascinating display, with view of
the night sky as seen from Wellington, Christchurch, the South Pole and the
Equator. The chief constellations and the planets visible at present were
indicated, while the demonstration was augmented by the live-wire commentary
After the Planetarium, many photos of the convention group were taken against the backdrop of the gardens and then everyone got into cars and headed out via Memorial Avenue to Christchurch International Airport at Harewood.
After some had made a short inspection of the Duty Free-Shop, the party was
divided into two groups for a conducted tour of the airport buildings and
the technical facilities. The radio equipment naturally was inspected thoroughly – and Douglas Johns never had it so good as he took the chance to log
some utility “DX” – while the view from the Control Terminal at the top of
the building was most impressive with the panorama of the runways.
At 4:30 everyone gathered at the Flamingo Airport Restaurant for Convention Dinner. This was the last evening of the restaurant before transferring
to new management, which caused some unnecessary alarm among Canterbury Branch organizers who could see hot pies being the main Convention Dinner course, but everything went as planned – and for Bill Brassington things were even better than planned – he had two helpings of pork chops.

Next out to Leithfield Beach, 26 miles north of Christchurch, where the Convention committee has spent the previous afternoon erecting aerials in preparation for the convention night’s listening. The use of three cribs had
been arranged and Don Reed’s big caravan had also been set up. On arrival
at Leithfield,everyone had got more or less organized into their groups for
DXing but a surprise arrival was a cameraman – and assistants – who wanted
to take films for possible presentation in the news over CHTV-3 on the Sunday evening. After re-arriving at Leithfield for the benefit of the camera,
Arthur Cushen and Ken Mackey “in action” at their radios were submitted to
the glare of the floodlight and Mick Frost was photographed in his blazer
with the League flash prominent,

So to DX…. Indications at first were for a good evening, but increasing
static effectively ruined reception, and the only thing of interest to be
heard was a KPUB on 1480 Kc, apparently on test. While many of the strong
regular stations managed to push their way through the noise, reception was
in general just normal for a Convention – poor! At.9 pm, conventionites
were officially welcomed by Canterbury Branch President, Don Reed, and other
speakers, while branch presidents or their representatives replied in turn.
A guest speaker, “Mr. String-er”, was interviewed by Ken Mackey, which interview gave us all an insight into the NZBC’s current “policy” in the location of new radio stations in N.Z., Popularity Poll lists were handed in,
with the winner being not surprisingly Dick Pollard; convention listing of
stations being Radios Australia, Nederlands, Japan, Canada, Switzerland, VOA
BBC, HCJB, Radios Moscow and Peking. Raffle winners were Graeme Shillito
and Bill Marsh. The NRC slides from Ray Edge were shown, greetings from Jim
Healey’s “Modern Sound” from 4ZA were heard, and finally a Quiz Panel was
organised (Arthur Cushen, Jack Blacklock, Peter Grenfell and Dick Pollard),
compered by Des Lynn. The panel answered DXers’ questions, and it is hop-
ed to be able to reprint some of these answers on some occasion.

Next, supper – Fish ‘n’ Chips and Savouries. At 11.55 the Special from
Wewak was scheduled, but reception was so horrible and noise so great that
this was not heard – however, the 2SM calls at 12.50 a.m. were received OK.
As for 8KN 630, well, what could be heard between static crashes turned out
to be Calcutta. And so through the night… A few diehards stayed up all
night, but most tried to sleep after hearing the All Black-Barbarians game.
Breakfast later on Sunday morning, then tidying up, while taped greetings
from overseas were played. Competition prizes were also distributed, and
final speeches and farewells were made, then conventionites were driven back
to town and lunch at their hosts.

And so the National Convention was over Officially, but Sunday after-
noon activities – or inactivities, depending on your point of view – included
scenic drives around Christchurch and sleeping. In the evening, many conventionites tried to see themselves on TV during the news, but you had to be
quick as the Convention item only lasted about 30 seconds.

To all the many visitors to Convention ’64 in Christchurch, thank you-
for coming. Canterbury Branch members, your hosts for this time, enjoyed
having you all, and we hope it’s not too long before we see you again.

Tony King gleaned the following from a QSL letter:

Special from KPUB 1480 1kw Pueblo Colorado . Heard by the 40 at the convention (I’ve found my thank you letter to the CE + tape transcript) We phoned the CE from a phone box in Amberley around 11.p.m. MST to find out what he was going to air – a tone test plus ID I taped – “If you are a KPUB listener and a business man let us know about it and let us put you on our honorary KPUB Country Club list. Won’t you do that ? K P U B Pueblo” Reception was excellent over KYOS and KBOX

Don’t remember too much about the 1964 Leithfield Beach Convention. The little Morry jammed itself in 2nd gear. Consequently Neville Ross and I spent a large amount of time in Rangiora!  As for the 1960 Convention at Leithfield Beach, or was it Spencerville, there was an organised lunch at the Amberley “Tearooms”.  We had to wait an inordinate length of time to be served so Ray Pritchard started eating the Dahlias from the vase at the counter. Crikey!
Sutton.

From Douglas Johns:The 1964 convention at Leithfield was the only convention I attended, and it sticks in my mind for the atrocious atmospherics that spoiled all chances of DX that night. I did manage one station – WING Dayton Ohio on 1410, which was brave enough to rise above the static in the early hours of the morning. The only other thing I heard was a Royal Canadian CC-106 – the military version of the CL-44 – as it slowly made it’s way south from Honolulu to NZ. The CL-44 was a slow cargo carrying turboprop, and I heard nearly every position report it made that night.

Got a ride back to ChCh the next day with Eddie MacAskill. He had either a Humber 80 or a Hillman Minx – the 1950s rounded version.

As it happened I was in Leithfield in August 2019 – it hasn’t changed that much !!! although I couldn’t now identify the King bach.