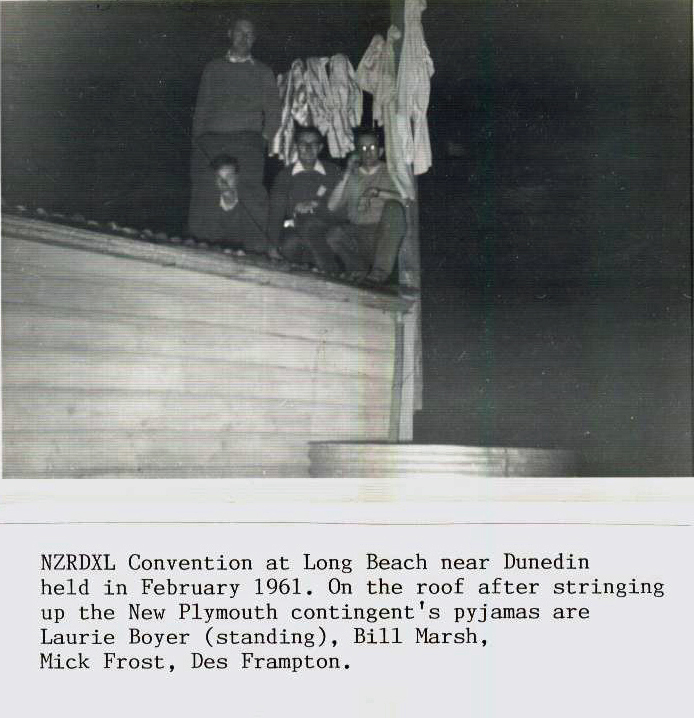 Despite poor reception the 1961 DX League Convention held at Long Beach was an enjoyable function which was attended by representatives from Auckland, Taranaki, Canterbury, Southland and Otago branches.

Organised by the Otago branch the convention was held on the weekend of February 4-5. The first DXers began to arrive on Friday and by that night a number were in residence at Long Beach and logging stations. On Saturday afternoon the official gathering was held at the Gardens where introductions were made and a special copy of the OTAGO DX NEWS with publicity booklets on Otago were distributed. Visitors not accustomed to Dunedin’s hills were given a treat when the gang set out to reach the top of Signal Hill where a visit was made to the Post Office V.H.F. radio terminal station. Here two P>O> officers explained the set-up of the new radio-telephone link between  Dunedin and Invercargill. A demonstration of the equipment was also given. Before leaving the city members enjoyed the great view of Dunedin and the surrounding country from this high spot.

After an enjoyable three-course dinner at Bon Cafe, DXers set out for Long Beach, 16 miles north of the city of the Pacific seaboard. Listening posts were set up in Ken Mackey’s, George Beardsmore’s, Laurie Boyer’s and another crib. DXers were soon in gear and tuning in on the Yank beams., but it soon became evident that this was not going to be a good night for reception. Heavy static later gave way but though a number of stations were logged conditions were generally poor.

At midnight everyone tuned to 825 for the YNOL special. That 4ZA certainly made the sign off last out, but thanks to the transmitter boys the station left the air promptly. Was YNOL heard? At this stage we are not prepared to say yes or no. Heavy static returned to the airwaves by the time ABC repeater station 8TC Tennant Creek came on air with a special. It was heard but with great difficulty. Many conventionites did not arrive at their allotted beds and went to sleep in corners.

After breakfast on Sunday morning everyone gathered at Ken’s where Otago President George Beardsmore extended a welcome and announced prize winners of various competitions staged on conjunction with the convention.

Humour entered the scene when XERF’s “chief engineer” paid a visit and was interviewed by broadcast editor and League president, Ken Mackey. The script was written by the NRC but “arranged for New Zealand conditions!”.