LOCATION: Near Opunake which is approx. 1/2 an hour’s drive NW of Hawera. Travel North-west through Opunake on State Highway 45 (better known as (Surf Highway) a half mile and turn left head for the Mountain on Te Namu Road (Namu means Sandfly).It’s 1.5 miles to the farm entry on the right. 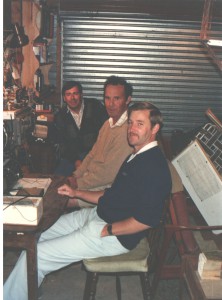 Ray Crawford, Robin and Mike Smith in the Opunake shack

The Homestead is a 1/2 mile back from the road set among trees & bush. 209 acres of land for antennas! In the early days much of the land was covered in gorse. It was also very wet and swampy. The land above swamp level consisted of rocky hills! The slopes between rocky hills and swamp contained deposits of iron-sand. It took over 26 miles of stoned in & tiled drains to get it anything like dry. Possibly the drainage may have been detrimental to reception.

My interest in DX was aroused when I met up with Bill Woller and Ted Manning of the NZ DX Radio Assn. The year was 1953.My first antenna was about 15 metres of wire up the nearest tree (about 10 metres high).My first receiver was a regenerative 1 valve Hikers One which I built under the guidance of radio man Charlie Yep. Humble beginnings but this set gave reception of Australia/NZ, many Asians and even picked up Cairo(620kHz),WLAC(1510kHz) and Monte Carlo(1466kHz). 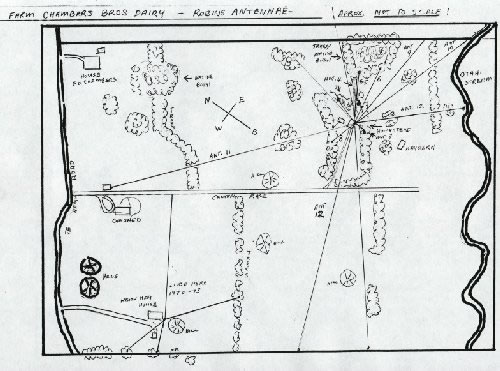 ANTENNA 2: Year 1954.Ran a 65 metre wire Northeast to the top of an 25 metre pine tree. Straight toward North America. I was advised to run an antenna towards the area I wished to receive but North America it would not have! It favoured Northwest to West to Southwest. Soon had large col1ection of Aussie QSL’ s.

ANTENNA 3: Later, 1954. South backlobe – dimensions as last antenna. Pick-up lobe Hawaii round to Japan. Broader on lower frequencies. Above 1200kHz it picked up strongly round to Japan but rejected China.

ANTENNA 4: 1955. Erected 3 wires fanned out between Northeast and East and each wire taken directly to ground at the far end. Length 120 metres. At the receiving end the wires were commoned to a single lead-in. Height approx. 6 metres. Good low angle pick-up from Hawaii-U.S.-Mexico but signal levels a bit low. Soon found that when this antenna was combined with the South backlobe there was a great signal lift from not only the States but also round to South America & Portugal The South antenna was connected to the receiver Aerial Terminal and the radials to Earth or AE terminal.

At this point I opted for a better receiver – an old Gulbransen. With this antenna set-up, amassed a lot of U.S. Central/East Coast DX. But soon a better still receiver was in the offing – the Radel DX Broadcast 12.Much more selective & heaps of grunt. 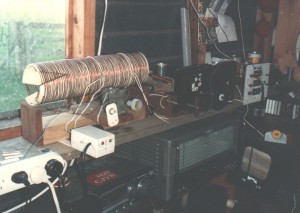 One of Robin’s homebrew phasers 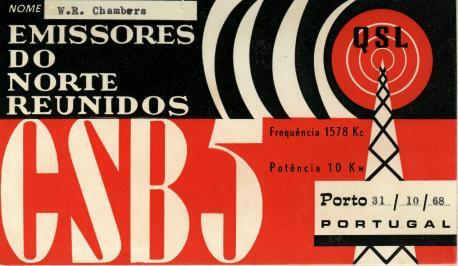 ANTENNA 6 Another big backlobe. This time East South-East 200 metres long,15-20m.high. In February/March Aussie signals would peak around 2.00-3.00PM quite strongly but were very disturbed, fluttery signals.

ANTENNA 7 High Northwest backlobe. This was for phasing out NZ stations South of Opunake. It was used in conjunction with the Northeast-South antenna combination. As follows: 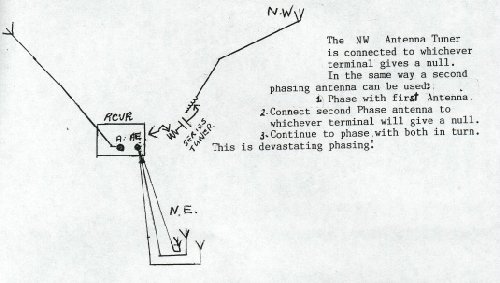 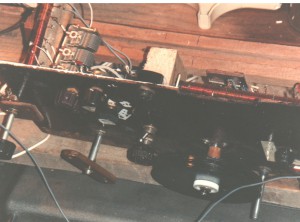 By this time I was also using a National DR31 as the Eddystone was ailing & not holding its alignment and the audio was crook when filters were needed. Except the notch filter which is excellent for 1kHz splits.

Well that’s the end of an era. When we left the property noise problems were much on the increase. Higher voltage power lines in the area & salt spray don’t go well together. And the modern way of stock control – the electric fence barrage.

A few results from the antennas:

ANTENNAS 3 & 4 This set-up was a great stand-by and was in use a long time. 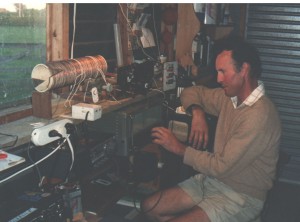 That master shows how it is done! 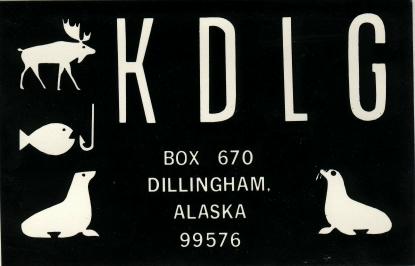 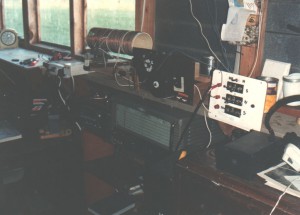 Brunei Broadcast Service 1240kHz 20kW aired a DX Special for the NZDXRA arranged by Ted Manning, New Plymouth.1430-1530 UTC. 30.5.59. Their signal was fair with some reasonable peaks. Copy was sufficient, though difficult, for verification. The Chief Engineer Mr. A. T. Dunk was sorry to learn that reception was unsatisfactory. 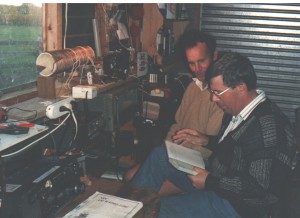 Cook Is. 630 kHz 5kW.A really tough one! But finally got them on 6th Aug.1985.Used an inverted V antenna aimed NE over a high tree as an element for cardioid with a loop antenna. Did you know that it is possible to null in two directions with such a set-up? Well it is and the nulls are steerable. That’s a long story for now. Anyway successfully nulled 2YZ Napier as well as an Aussie on the frequency. and they came thru for a pretty good report.

Papua-New Guinea: Logged Wewak of National Broadcasting Commission of P.N.G. on 1 July,1974. l520kHz,2kW. Time 1330 to s/off 1400.They were pleased to verify – so says Allen Hull, Director of Programmes.
and P.S. “We apologise of being delayed response, to the fact we were not organised, due to our changes and formed new Broadcasting Organisation. THANKYO.” !! My notes say their signal was weak to Fair. 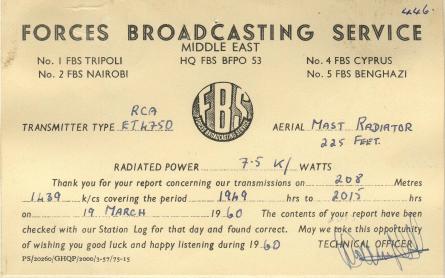 9PA Port Moresby, Papua/New Guinea on DX Special arranged by T. Manning of
New Plymouth for the NZRDXL. Power 500 watts. Sunday 27.7.58 at 1315 UTC.
Signal at good level but much Static that morning. 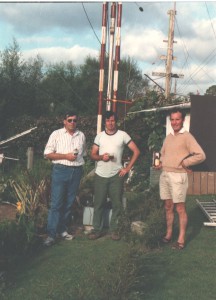 On 10.3.89 I set loop & cardioid array against 2XS Palmerston Nth. Quite a lot of static but 3GI Sale, Victoria very strong. Their announcer was carrying on about the lightning outside. A loud crack and they were off air. Time 1828 UTC. Male announcer said “I’m sorry we had a 10 seconds silence in the middle there. Our big tower at Longford being about 600 feet high – of course the lightning loves it and whenever lightning goes by – Zap!. And our arrestor does the job but occasionally it gets past that & knocks the poor transmitter out. We don’t want our brand new one knocked about do we? But that’s what’s happening” and at 1835… “And now looking at our local weather, I’m sorry about all the racket, by golly there’s some lightning about this morning! Anyway it should be a mild day and humid with showers and thunderstorms and listen to that thunder! Oh dear… boom, boom! Anyway, there will be thunderstorms this morning – a fresh flash at the moment”