HCJB Pifo – End of an Era 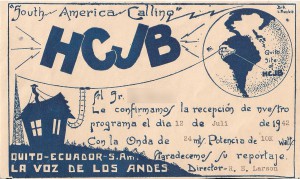 Now that station where the cubical quad was made famous is in jeopardy of permanent closure. Fifteen years I visited the HCJB Quito studios and the Pifo transmitter and antenna site.

The Quito studios and equipment were cast in the 50s; reel-to-reel tape decks, et all, but the Pifo site was quite something to behold; the Sterba Curtain array, the cubical quad and other antennas and then to literally walk into the 500,000 watt transmitter. The RF and modulator sections were on the left of the isle facing towards the control room, the power supply on the right immediately above a large swimming pool. The pool water was heated for the Pifo transmitter staff and family use by circulating it through the transmitter. There were four other smaller transmitters in the same building, a 100 watter, a 1 kW, a 50 kW and a 250 kW.

Switching antennas from one transmitter to another, or changing directions, was literally done by hand-throwing huge knife-type switches in the building attic. One needed to be very careful in the attic where OSHA would have never ventured.

The entrance door foyer to the building has two glass cases showing “mistakes” in engineering; melted tubes, melted and charred insulators, transmission line, those things that happen in a high RF environment.

This which follows is from a September 25 edition of the SW DXing hobbyist newsletter DXpress. “ECUADOR. HCJB: With a recently signed agreement HCJB has to dismantle the Pifo facilities within two years. No decision has been made yet if a new station elsewhere in Ecuador will be built. In the end this will depend on the financial situation of the mission. Back in May a studio guest of Kim Elliot explained that earlier hopes to continue at Pifo after dismantling the tallest towers have been crushed. Now it appears to be questionable if any substantial replacement for Pifo will be ever built. (Ludwig-Germany, BCDX)” Yes, this would be the ending of an era from “high in the Andes.” Bill Smith. NZ DX League Member USA)

Even as HCJB World Radio has begun dismantling shortwave radio antennas at its Ecuador broadcast site in Pifo, strategic opportunities for spreading the gospel via radio are emerging for the mission.

To accommodate new international airport construction near the capital city of Quito, missionary engineers and national staff have lowered a two-antenna curtain array that Radio Station HCJB, the “Voice of the Andes,” formerly used to air programs to the South Pacific and Europe. In 2003 the mission switched to local and regional AM and FM broadcasts in these regions while refocusing its Ecuador-based international shortwave outreach on Latin America.

Other antennas will also be dismantled in accordance with the mission’s late-December agreement with the Quito Airport Corporation (CORPAQ) which is compensating the mission for labor, but not providing funds for new site construction.

“We know that 30 towers at the Pifo site have to come down by December 2007,” explained Jim Estes, director of HCJB World Radio’s Latin America region, referring to antenna systems that could obstruct the approach of landing planes. Pifo is a town about 15 miles east of Quito.

Of 48 towers sustaining 32 antenna systems on the 110-acre site, another 18 lower-height antennas—whose signals do reach Latin America—will not impede approach. But those too will be dismantled by the time airport operations are expected to begin in 2009.

Mission leadership has determined that the station will not risk potential radio interference to future air traffic communications once commercial flights begin. Barring unforeseen circumstances, all transmissions from the Pifo site (including Spanish, Portuguese, German, Low German, English and various indigenous languages, including Quichua) are expected to end sometime in 2009.

Beyond that, Estes and Radio Director Doug Weber are considering various options, including the idea of building a new, smaller site in Ecuador as the mission reviews how shortwave radio in Ecuador fits into its objectives of reaching the world for Christ. Other options include buying airtime from other broadcasters or placing transmitters at other sites owned by likeminded missions.

“We’re going through a process right now with our engineering crew of studying all three of those options to see what the cost is,” Estes said. “And cost is one of the issues for us. We’re trying to be as economical as we can be.”

A 100-kilowatt transmitter has already been shipped from Pifo to HCJB World Radio-Australia’s shortwave site at Kununurra. That facility began transmissions in mostly Asian languages (in addition to English) in January 2003. Staff at the Australian site expect the transmitter to be on the air by early April.

Ten shortwave transmitters remain in Ecuador where Radio Station HCJB began broadcasting from Quito in 1931. The international transmitter site was later moved to Pifo in the early 1950s. Four of those transmitters were designed and built at the HCJB World Radio Engineering Center in Elkhart, Ind., including a powerful 500,000-watt unit.

Changes at Pifo are not expected to diminish the mission’s participation in the World by Radio (previously known as World by 2000) effort begun in 1985 whereby Christian international broadcasters committed to make gospel broadcasts available in all the world’s major languages.

Of the 28 World by Radio languages involving HCJB World Radio, those that once aired from Quito have since been shifted to other locations, including a shortwave site in the U.K. that reaches the Euro-Asia and North Africa/Middle East regions.

Of more than a dozen languages that air from Australia, two—Bhojpuri and Chattisgarhi, both spoken in India—are World by Radio languages. Still other World by Radio languages are aired by local stations and networks worldwide.
“We’re involved in radio all around the world, but our involvement is much different than what we’ve done historically here from Ecuador,” Estes said. “It’s more of an involvement where we’re helping local people develop their radio ministries to reach their own people.

“Here in Latin America we’ve helped [radio ministries] everywhere from Buenos Aires up to Havana with such things as studios, equipment, technical advice and training on how to do radio,” he added. “It’s quite exciting to see.” Since the 1990s the mission has aided local Christian radio endeavors in some 300 cities in more than 100 countries while facilitating network programming via satellite in all but one of its five global regions.

Assistance to local partners is facilitated by the engineering center, and the center’s pioneering work in digital shortwave radio also presses on, with continued development and testing of Digital Radio Mondial (DRM) equipment —digital broadcasting for the shortwave transmitters produced there.

The Pifo site is part of that project, said Weber, who also heads the DRM task force for HCJB World Radio. “We have participated in DRM tests from down here with the DRM consortium, and we will continue to do tests over the next few years,” he explained. “We are very much monitoring DRM in its development in Latin America, hoping that we can eventually use that technology and be a pioneer within Latin America, not only in digital shortwave but in digital AM.”

An announcement 10 years ago had alerted the mission’s engineers that Quito’s long-awaited new airport might be built just six miles from the mission’s shortwave facilities at Pifo. Impending changes looked more certain by mid-1997 when aviation authorities said that due to potential interference, HCJB needed to dismantle its Pifo installations.

Subsequent plans to dismantle and move the Pifo installation to Ecuador’s coast were first tabled in 2003 by mission leadership, and later scrapped due to concerns about increased energy costs. Electricity for the high-powered transmitters has been generated at a mission-built hydroelectric plant in nearby Papallacta.

One response to “HCJB Pifo – End of an Era”