The Writing’s on the Wall

This article is copyright to radiodx.com (c). All rights reserved to the New Zealand Radio DX League. Author: Martin Hadlow

It looked like it would be an impressive place to visit. At the front gate, two guards stood with their tripod-mounted machine gun placed strategically atop what looked to be a table. The weapon was wrapped in a long belt of live ammunition. Steel combat helmets sat on the table alongside the gun and the guards gave us a cheery salute as we entered the compound. We were at the training centre of Radio-Television Afghanistan, a fine old building which had once been home to the first Radio Afghanistan station. Nestling in a back-lane in the old city of Kabul, just a stone’s throw from the bustling money market and sellers of clothing and fruit, the building wears its age gracefully, albeit with countless scars of bullet holes dotted across its façade.

The Director and his team of trainers were on hand to greet us and provide a guided tour of the facility. Our party was there to view the complex prior to the arrival of a UNESCO-funded training group from the Asia-Pacific Institute for Broadcasting Development (AIBD) in Malaysia. The AIBD, an intergovernmental organization of which Afghanistan is a Member, has been contracted by UNESCO to put in place a phased series of training courses during the coming year and beyond. The initial course is due to start in February. Our first stop was at the two training classrooms. Desks and chairs were in place. Blackboards too. In one room, where engineering training was previously held, the desks were equipped with large steel boxes. These were feedback mechanisms where, no doubt, students could punch in the answers as training courses proceeded. The lecturer could monitor progress on a master control board. The equipment, apparently supplied from the former GDR, was impressively solid. The master control system, about the size of a small refrigerator, seemed to have more buttons, levers and lights than the navigation bridge on an aircraft carrier. 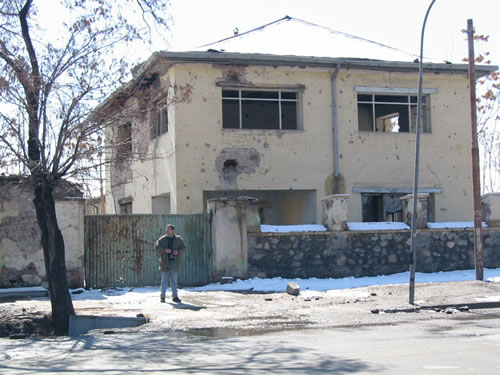 This was once the UNESCO Educational Technology Centre in Kabul. It had many radio studios and a large TV production studio for distance education purposes. Now, it is stripped bare. All ruined…..I hope we (UNESCO) can re-build. (Photo credit: Jim Williams, UNESCO).

We next wound our way to the main studio complex. This, like the training rooms, was a little dusty inside and totally devoid of electricity. As we entered the large music studio, an impressive 40 square metres in size I was told, we stepped gingerly to avoid any potential hazards. The darkness was complete. A brave Engineer Yhya led the way, his plastic cigarette lighter coming in handy as we inched along the wall and peered ahead into the gloom. Was that really a drum kit and grand piano I saw in the flickering flame of the lighter? Fortunately, a torch soon appeared, its battery weak but certainly more potent than the cigarette lighter.
– 2 –

Yes, it really was a grand piano! And, nearby, stood an upright model. I couldn’t resist the temptation to tickle the ivories. The strings were slightly out of tune, but after many years unused, hardly surprising. To one side of the room was a large drum-kit, dusty but complete. I can’t say I’m musical, but I toddled the tom-toms anyway. The chance doesn’t often occur. As our torch scanned the room, I saw ahead the broken shaft of an electric guitar leaning against the wall. The fretboard was there, but where was the rest of it? Perhaps the remnants of a concert by The Who? As we left the studio, we passed beneath the antlers of a rather large deer nailed to the wall directly over the lintle. I haven’t seen that before. Well, not in a music recording studio, anyway.

Nearby was the rehearsal room. Its walls still told of sound-proofing and sopranos. Its concrete floor told of a repository for broken furniture. Next stop was the upstairs master-control studio, still equipped with Siemens consoles, a Revox tape-recorder and even a record turntable. But I doubt that it will ever turn again. And I feel sure that the Siemens company would be delighted to see their old consoles in such good order, with slide mixers still functioning, despite the fact that the equipment must be close to 40 years of age. In a nearby room, a technician whipped off a dust-sheet to reveal two Studer tape-recorders, still in one piece but, sadly, with little life left in them.

All too soon, it was time to take our leave. We said our farewells to the intrepid and dedicated team of trainers and headed off to our next destination. This time, we were to visit the production house where UNESCO once operated an educational broadcasting radio and television production studio. The two-storey building, or what was left of it, is located close to the university in a street of houses and shops ravaged beyond belief by war. Hardly a single one is intact. Again, led by the courageous Engineer Yhya, we entered the compound of what had once been UNESCO’s pride and joy. The first thing I saw was the shell of a rusted motor vehicle lying in the garden, its body peppered with bullet holes. On the wall near the front door, a large hand-drawn piece of graffiti immediately caught the eye. Translated, its message was potent, its plea chilling. It read “War, don’t kill us! We are teenagers”.

I stepped into the building and was taken-aback by the devastation. Everything was gone. Doors stood idly, their glass panels stripped. Windows had long gone. Where once a radio studio had stood, former occupants had decided that it would better serve as a toilet. Faeces covered the concrete floor. To the right, the front office was a scene of broken and twisted metal, an old table, covered with dust and debris but still in one piece, stood like a sentinel of better times long-gone. Propped up on the window-sill were two steel army helmets. Each was riddled by bullets. Hopefully, just target practice and not worn by combatants at the time.

We trod gingerly along the corridor, looking left and right at where radio and television studios had once stood. We didn’t enter, always mindful that discarded ordinance and explosive booby-traps are common in this war-torn country. Finally, we reached the main television studio. Poised high above the studio floor, the gutted director’s box looked down on us forlornly. The quiet was deafening. The destruction was complete. Everything of value in the building had gone, even the toilet receptacles. Only the sound-proofing on the walls of the main studio seemed to have survived, plus some tiles in one of the bathrooms.

We stepped out into the daylight. I didn’t know what to say. I just shook my head. Engineer Yhya spoke first. “Now, Mr. Martin, this all belongs to you”. We all laughed together. “Please bring it back and make it UNESCO again” he said. I looked at the wall where the teenagers had written their brief but eloquent statement. I knew that we would do our best to see that the centre was rebuilt and, when reconstructed, we would place a large perspex sheet over that wall to preserve the writing and the hundreds of bullet holes that now dotted it. A lasting memorial to a time hopefully now past in Afghanistan’s history.

Engineer Yhya closed the steel outside door as we left the compound and went out onto the street. Around us, ruined buildings stood, their roofs torn from them, their walls pock-marked by shell fire. But in this scene of near desolation, I felt hope. Hope that, indeed, the UNESCO educational radio and television production centre would again rise from the ashes of this part of Kabul and make a real contribution to education, peace and tolerance in a country that, for too long, has only known conflict. A centre where busy, happy and creative people put their minds to the defences of peace and where, never again, young people would have to write on the wall: “War, don’t kill us! We are teenagers”.