By Kaj Larsson, Sweden, freely translated from the Swedish by Richard E. Wood

As I lay dozing, dreaming of fame and fortune late in the fall of 1969, my dreams were rudely interrupted by a phone call. My wife answered it, and brought me a message that a certain German-speaking gentleman wished to talk to me. A phone call from a German? But I don’t know any Germans! Oh, but wait…yes, there was that German family who helped me out when my motorcycle broke down as I was riding through Germany that summer. In a flush of gratitude, I had invited them to visit me up here in Sweden. And now, it seemed, here they were, probably waiting around the corner, expecting hospitality and conversation. But my strong verbs weren’t strong enough to face them! Their adjective declensions were something I’d rather decline.

“Don’t worry”, said my wife, “he isn’t a native German; his own conjugations are pretty convoluted. In fact, he sounds far from Teutonic in origin. Go on, talk to him!”

Plucking up courage, I took the telephone and listened. “This is Herr Ri”, said an Oriental-Rhenish voice. “I’m with the Information Office of the Korean Democratic People’s Republic, just established here in Stockholm”. Mr. Ri asked me whether I could received Radio Pyongyang. Being unwilling to tell him honestly that Radio Pyongyang was the kind of station a DX-er listens to just once in his lifetime, to report it to get a QSL, I told him that, of course, I listened to it, certainly.

Mr. Ri told me that he had received my address from Radio Pyongyang. His own Information Office had tried, he said, to receive the voice of the homeland, but without success, despite two weeks of intensive searching on a Grundig Satellit. He said that he would be very deeply indebted to me if he and a few other Koreans could come around and visit me, to listen to the voice of their homeland, the Korean broadcasts. Well, having been subjected to the indoctrination of all the DX papers on how DX-ing was the key to international friendship, I could hardly snub these gentlemen from the land of Kim Il Sung. I told them that my doors were open wide.

A short while later we were all sitting together at my table. Out of my radio floated the tones of North Korea’s national anthem. A touching moment! Not an eye in the house was dry. There followed a scintillating half-hour of North Korean news in the original language. When the program was over, we talked earnestly about the difficulties involved in receiving Radio Pyongyang in Sweden. The gentlemen had tried in vain to get hold of a radio capable of receiving Pyongyang. And so they were appropöriately impressed at the ease with which your writer was able to tune the station in. All Korea’s eyes were upon me: they wanted to know exactly what kind of a radio it was that I had, for that one, and no other, was the receiver they wanted for themselves.

Choosing my words carefully, I did my best to explain that the set was an aggressive, fascist-imperialistic exploitation machine from the home of decadent capitalism, the U.S.A., but this revelation did not dim the ardor of the Korean’s love for it. So, the next day, off we ent to a big radio store and there I chose for them a Drake R-4B with a crystal specially selected for Pyongyang, and a variable antenna of equally capitalistic Hy-Gain manufacture; it alone cost 600 kronor. The whole bill came finally to around 4000 kronor, but with Oriental tenacity I worked it down to 3000, which took a good deal of bargaining power.

Why was I so anxious to drive the price down? Well, I felt a debt of gratitude for a gift which had been given to my wife and me before the Koreans left us the evening before. Mr. Ri told us about a wonderful plant which only grew in North Korea and the wonderful brandy which was made from the plant. He talked long and eloquently of the miracles which Ginseng performed daily, how it increased one’s life span after the first swallow, how good it was for expectant mothers (with a knowing nod to my wife, who was forced to explain that she was not pregnant, but looked that way all the time), etc., etc.; whereupon from his attaché case he produced a whole bottle of the miraculous liquid. 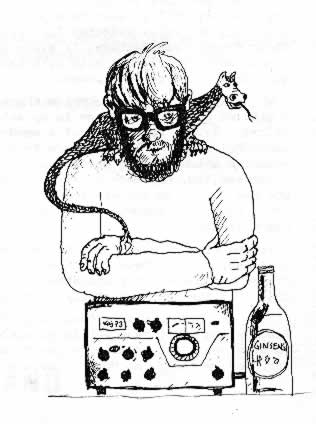 At the time of our visit to the electronics store I had not yet tasted the drink. If I had, I would have let them pay full price. A degustation revealed that, (a) the brandy had a weak, but unmistakable fragrance of old unwashed potato peelings, and that (b) the taste was fully in accordance with the aroma.

Talk of life span associated with the brandy seems well justified, though; two years have passed and I have yet to persuade a guest in my home to try a sip, however thirsty he might be. And so this longevity-inducing drink will itself persist to a ripe old age, and be found, no doubt, among the personal effects which I shall leave to my heirs.

That same evening, the Drake and associated equipment were installed in the suite in the Hotel Foresta which the Information Office had rented. The antenna was installed among the flower-boxes on the balcony with its magnificent view. Pyongyang came thundering in, as expected, and we knew that Swedish-Korean friendship had just taken a great leap forward.

Not many days later, the irrepressible Mr. Ri was on the line again. This time it was a German-speaking station which had parked on 6540 kHz and was droning out long lists of numbers. It wasn’t easy to explain how this might come about, but I think that I explained clearly enough, without giving the false impression that the numbers station was intentionally sabotaging Mr. Ri’s reception.

Later in the fall, on the anniversary of the foundation of the Korean People’s Republic, I was invited to a cocktail party at the Foresta. Once again, the Koreans showed some unfamiliarity with Western ways: the cocktail party was more like a smörgåsbord, with cold meat balls, fried fish, cold chicken and other heavy food. The drinks too were not exactly cocktail-style: sweet cooking sherry, beer and Coca Cola. The dominant language was broken English and the talk gradually swung from cocktails small talk to increasingly sharp attacks on imperialism and ended in a crescendo of toasts to Kim Il Sung.

After that I gradually lost touch with the Information Office, though once or twice they called me out on an emergency call to the villa in the suburb of Lidingö to which they had moved from the downtown hotel. One time I found that they had twisted the RF gain control tooo far; another time the coax cable to the antenna had been knicked in about 25 different places as they had opened and closed the window through which it ran; and another time their budding radio expert Mr. Ri had gone home again. I patched up these situations with true Swedish effeciency, and they fed me Korean cakes containing North Korean cognac. I might also recommend North Korean cigarettes to those of you who are looking for a really effective way to give up smoking.

I still have some contact with them; from both Pyongyang and Lidingö I receive masses of magazines in color and black and white in English, and luxurious books in Swedish with the thoughts and words of Kim Il Sung. And yes, I even was offered a job with the Information Office, but the pay offered was a little on on the low side. The money was the least of my concerns, however; I was more worried about the diet of the Office: Ginseng, sweet cooking sherry and cognac. Even Kim Il Sung’s thoughts might not have sustained me on top of such a liquid diet. 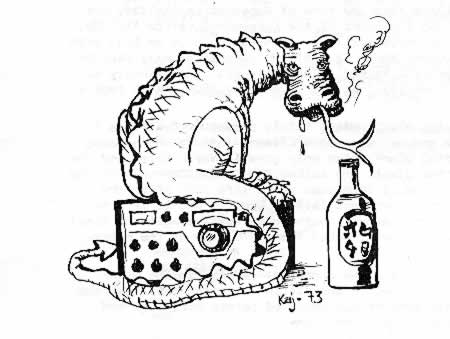 (The article was first published in Distance, club magazine of Umeå SW Club, Sweden, and later in Eter-Aktuellt, the magazine of the Swedish DX Federation and is publsihed with the kind permission of the author)