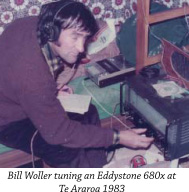 With regret we have learned from Mrs Marion Woller of the recent passing of long-time member and ace medium wave DXer Bill Woller of Opunake, after a long battle with bone cancer. Marion says that Bill was still having aerials put up and down into the last two months before he died and the Eddystone receiver that he bought back in 1956 was regularly transported from
room to room in search of the best and quietest place to be listened to.

Marion writes that “In the last few weeks it got too heavy for him to lug from room to room so when the boys were home they followed Bill round carrying the radio for him. Bill loved getting the “DX Times” each month and read it front to back.”

I personally only met Bill on 2 occasions, the first during a mini-DXpedition to Paengaroa in the Bay of Plenty in 1974, where he and ROBIN CHAMBERS showed off a collapsible loop antenna, and demonstrated their DX skills. Then in 1983, Bill and Robin joined us at Te Araroa (East Cape) for a highly memorable DXpedition, along with HARRY WEATHERLEY, JACK SEARLE, MIKE SMITH, DENE LYNNEBERG, TONY MARR, BARRY WILLIAMS & DAVID RICQUISH.

It was memorable in many ways, including our record-breaking ‘longpath’ reception of Saudi Arabia 1521, a distance in excess of halfway around the world in a path going across North Africa, the Atlantic, the Gulf of Mexico, and the Pacific at 3.30 in our afternoon. I distinctly recall the amazement of those of us
using ‘new generation’ transistorised receivers like the Drake SPR-4, when Bill’s venerable Eddystone 680X was delivering audio from Saudi Arabia before the more modern sets.

Bill began DXing in 1953 so had a wealth of experience and expertise in the hobby. As a budding DXer, I looked on Bill as one of the best, and always followed his contributions to the ‘DX Times’ with interest. He is a great loss to our hobby and the DX League.

Reproduced from the June 2008 DX Times.