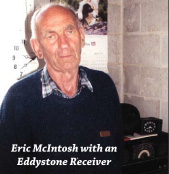 It is with regret that we advise that Eric McIntosh, Life Member of the NZ Radio DX League, passed away in Invercargill on Tuesday 2nd, September, 2008. The League expresses its deepest sympathy to his wife Phyllis, daughters Bernice, Virginia, Erin and Ainsley and their families.

A floral tribute and message of sympathy was sent to Phyllis McIntosh on behalf of all members. A number of tributes to Eric have been received and we publish these here.

RAY CRAWFORD writes – “To those who knew him, Eric was a wonderful friend, good DXer and always willing to pass on the knowledge and experience gained in some 60 years in the hobby. Those in the Southland Branch, along with numerous others in NZ and Australia, owe much of their ability in the hobby to having had close contact with him. “Eric was a watchmaker by trade and in his little shop in Invercargill you could always pop in for a chat about what was being heard. He was well known for his cycling around the town. One time he biked some 25 miles out to Riverton Rocks in teeming rain and a howling southerly to log KMTH on Midway Island on a DX Special. His dedication in rising to a challenge was second to none. In the 1960’s he had a little holiday house at the Rocks and many a DX session was held to log African stations on the shortwave bands.“He was the Treasurer of the Southland Branch for more years than can be remembered. If you were not financial then it was not long before he was chasing you for the fees. “Eric had a vast knowledge and many enjoyable hours would be had in deep discussion about any subject raised. It never ceased to amaze even those who had known him for almost a lifetime that he could come up with subjects that one had never thought he would be interested in. His recollection of events, names and dates was truly outstanding.

Eric was the first in NZ to have a Drake SPR4, which he imported when sets were still hard to come by and cost a fortune. I also recall that he logged Athlone, Ireland on 566 one morning with a weather report. This was one of his prized catches – the only NZer to have ever heard it as far as I know. Eric will be sadly missed by all those who knew him.”

From SUTTON BURTENSHAW – “Eric was a gentle gentleman, family man, voracious reader and a DXing friend to all members of the Southland Branch. Eric was always available to give advice or just chat about any matter, and indeed his workshop area although quite small was at times found to be filled with DXers such as Ray, Tony, Paul, Merv and myself all relating our night-before catches. “Eric was a determined DXer in that he would target a station to hear. One night, after a mixup in transport arrangements, Eric pushbiked out to Mervs’ 6×3’ at Riverton Rocks specially to hear a Far Eastern Station before sign off. In Erics own words “it was a head wind all the way.” After the DX session Eric bunked down for a hour then headed back to Invercargill on the bike to be in time for work, and again in Eric’s own words “do you know, the wind had turned around and I had a head wind again.” Eric had travelled in excess of 50 miles for the one station. “As a youngster, Eric at one time spent many months in hospital and I have often wondered if his love of reading developed at that time, for in later years he would spend many hours reading his set of encyclopaedias and would often pass on little tit bits of information. I often wondered also at the cruel twist of fate that a Watchmaker be saddled with Athiritis, but Eric, just flexed his hands and fingers for a while then got on with the job in hand. Eric will be remembered kindly by many and this is rightly so.”

STEVEN GREENYER recalls – “I first met Eric over 40 years ago through the Southland Branch and we got to know each other well when I moved into the next street to where Eric and Phyllis lived and Eric assisted me with concreting etc at my new home. Eric had spent a year in hospital and two years in bed at home in his late teen years. I am sure this influenced his attitude to life. He always biked to work in the best and worst weather that Southland can produce. When I asked him about this one day he said he thought of all the people who were unable to bike and how fortunate he was. Although suffering from Arthritis in later years, Eric was a willing helper at working days for the Tiwai Listening Site and a stalwart of the club. I could write much about him and his many abilities and interests but suffice to say it was an honour to have known him.”

A tribute from STUART FORSYTH – “I was greatly saddened to learn of the passing of Eric McIntosh, League life member and an all-round wonderful man. Yet another link in the chain of League history has been broken. I first met Eric in 1978 when I travelled to the AGM in Invercargill. The Southland Branch in those days was a powerhouse. Mervyn Branks, Arthur Cushen, Raymond Crawford, Sutton Burtenshaw, Steven Greenyer, Arthur Williams and Paul Aronsen were the names I remember. Going there as a callow 20 year old was an experience and one I was a little intimidated by. Eric was one of the first people I met and straight away I warmed to him. He was a kind, self-effacing man, whose opening greeting of ‘what have you been hearing?’ still echoes in my ears today.
Indeed he asked the same question whenever I met him subsequently. To a nervous young man he was encouraging and seemed to take a genuine interest in what I was doing.

In the past few years, prior to moving abroad, I travelled to Invercargill regularly, usually in the company of Ray Crawford. A visit to Invercargill wasn’t complete without a visit to Eric and Phyllis. I was staggered to discover that this good Baptist was actually a fan of horse racing. He never had a bet, never set foot on a racecourse, but was responsible for looking after the stopwatches of some of Southland’s leading trainers. From them he learned the form and followed their horses keenly. His main interest was in harness racing (trotting) and I know he followed the fortunes of the horses I have a part ownership of.

Out in the workshop of his garage his trusty SPR 4 and his loop aerial live, along with his watchmaker’s lathe and tools. Eric still had a listen occasionally and knew what was happening on the bands. He was always ready to regale us, when asked, of stories of listening in the golden days. There was the night when he logged 9 American 250 watters and got 7 back…. things we can only dream about today. As I said at the outset, a link in the chain of DX History has been broken. Eric has gone and the League is the poorer for it. Requiescat in pace.”