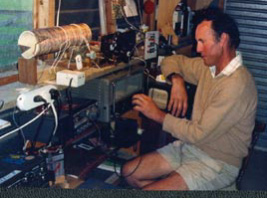 With much regret we advise of the death of this prominent
Taranaki broadcast band DXer on 30 December after a long period of illness.

Close friend and DXing colleague BILL WOLLER recalls “Robin was like a brother to us. I was also his best man when Daphne and Robin married. Never a cross word and always in good spirits. He first arrived here at our place on Longfellow Road Opunake way back in 1953. He was going to the Opunake High School and got to know my brother and came up with him after school one day. I was messing around with my old Wards Airline radio and running wires around the section and Robin was immediately interested. After hearing American medium wave stations KWKH and XERF and other old reliables, he went further and found out about the NZ Radio DX League and we both joined. Robin lived on his parent’s farm at Namu Road and soon had antenna wires running in all directions.

When I started visiting my Uncle’s farm at Pongakawa just out of Te Puke in 1960 (and of course taking along the receiver and wires) we found it was really ahead of Opunake for North and South American reception, and also Spain and
Portugal etc via longpath. So, Robin and I made several trips a year over there, also camping at the Matata Beach camp, and followed up with two trips to Te Araroa (East Cape) in the 1980s. At Te Araroa Robin took a few readings and decided that through the swamp was the way to go, so off with the shoes, up with the pants legs, and away he went. I was a bit chicken and stayed on the dry ground and fed the wire out. He came out of the swamp covered with mud from
head to toe, but the results showed it was just right. Nothing was too much trouble for Robin, up an 80-foot pine tree with a wire when a thunderstorm came along, no worries. We also experimented with kite antennas. You name it – Robin was game for anything. He was also a great surfcaster and trout fisherman.”

BRYAN CLARK remembers joining Robin and Bill twice for DX at East Cape and
once at Pongakawa. “His medium wave logs appearing in the DX Times were always the most exotic. I particularly recall his QSLing of the US Forces station in Diego Garcia (Indian Ocean) 1485kHz and his amazing long path European receptions including Capital Radio London 1548kHz. Robin proved that anything was possible in DXing – he was a dedicated experimenter with the use of multiple antennas for phasing of signals, and a prolific analyst of DX receptions. His monthly DX forecasts in the DX Times during the 1970s showed us when to try for MW reception from various parts of the world. The fact that he could hear so much from his West Coast location convinced me in the early 1960’s to try for North American MW stations from my home in Levin – that hooked me forever on this challenging aspect of our hobby. Thank you Robin for your significant role in my development as a DXer.”

DAVID RICQUISH writes “This is very sad news indeed and my sympathies go
to Robin’s family at this time. I remember a DXpedition to Te Araroa in the 1980’s, when Robin’s use of a fishing line to get the MW longwires across all obstacles was an interesting introduction to ‘DX Chambers Style’….and, of course, the catches were worth it. I liked the way he’d listen along the morning dial (dairy farmers get practice at this!) and reel off obscure stations with an offhand ‘oh yes, that’s the 5kw All India Radio in Gwalior – got him years ago’ whilst I scrambled for pen and paper. A long weekend was spent at his antenna
farm at Opunake. Oh, the joy of wavetraps and beverages combined. Pesky 50kw Sydney station – zap. Pesky anything – zap. What’s left, just a 50 watter in Broome, a 500 watter in Bali.. pesky – zap. Now, a 1kw in Pakistan..interesting! Robin was a true gentleman, a wonderful DX companion, and will always be remembered with affection.”We hope to have more recollections of Robin as a DXer next month. For now, our sincere sympathies are extended to Daphne, son Peter (who carried on the Chambers DX tradition into the 1990s), and the wider family.”

More memories of long-time member Robin who died suddenly on 30 December. From Hamilton, former Southlander SUTTON BURTENSHAW writes: “Very sad to learn that Robin Chambers had passed away. Robin was the complete DXer and his notes to ‘The DX Times’ were eagerly read and compared with what we were able to hear down South. MERV BRANKS would often say “what a wonderful location Robin must have”. Of course with the location was Robin’s technical ability with wavetraps and phasing, the results speaking dramatically. My sympathies go out to Robin’s family.”

Fellow ex-Southlander RAY CRAWFORD, now in Kingaroy Queensland, writes: “It was in the 70’s that Robin and I used to correspond two or three times a week for many years when we were DXing the Latins. It was interesting that we often heard different stations on the same frequency at the same time. As the days passed we would hear what he had been days before and vice versa. His antenna tuning apparatus was something to behold. While the coils and gadgets were huge in size they did a great job of nulling out interfering stations. He was a real ingenious DX genius. I had the privilege of spending a couple of nights with him and Daphne in 1990 when en route with MARK NICHOLLS to the DX Convention at Whangaparoa and doing some listening with him.”