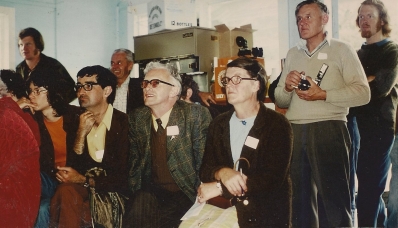 Jim is pictured at the 1976 Convention, second from right, seated to the left of Arthur Cushen

It is with much regret that we have just learnt that this long-time
member died last November.
Jim was then based in Hamilton and had worked in the Waikato University
Library for many years.
He attended the DX League AGM last October.
I first met Jim on a DXpedition to Raglan in the Waikato way back in 1966.

Jim was one of the conventioneers present at the very memorable 1976 Tatum Park, Otaki weekend that I attended. He was a very pleasant guy to talk to and a very keen and able  SW DXer and SWLer.

I got to know Jim reasonably well during my time living in Hamilton in the 1980s. A very knowledgeable man on many subjects  Jim was quite a character  and enjoyed a drink, we would often meet up at the Royal Tavern in Hamilton East after work and enjoy a few quiet ones. Both of us took part in a “Hobby Expo” at Mystery Creek  setting up  a display of QSl cards and had our radios there for anybody to tune around the bands and be introduced to DXing.  Jim and I also spent a weekend  DXing at Port Waikato with some members of the Auckland branch. I have not had any contact with Jim since moving to Tauranga in 1993. The news of Jims passing comes as quite a shock.
John Durham
Sad to hear that Jim Benzoni had passed away. Have happy memories of Dx’ing with Jim, Andy McQueen, Theo Donnelly and Bryan Clark at Raglan in Labour weekend 1966.